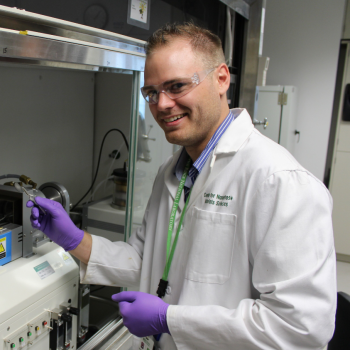 But Zach’s first order of business after graduating, wasn’t to head to the lab.  Rather, he spent a year in rural Honduras building schools and children’s homes. He worked with an organization called Students Helping Honduras (SHH) for which he had started a Wake Forest Chapter when he was a freshman.  And he continues important outreach to this day, including a US-Pakistan Startup Initiative, and involvement with Boston Partners in Education.

Back in the US, and before graduate work, Zach was an intern at Oak Ridge National Laboratory’s Center for Nanophase Materials Sciences, again in the area of solid-state electrolytes for use in batteries.

Zach started graduate school at Georgia Tech in Fall 2015, in the lab of Prof. Younan Xia. As a testament to his extraordinary focus and determination, Zach was able to produce and defend his Ph.D. thesis in February 2018 – just 30 months after beginning at Georgia Tech.  Zach was awarded the very prestigious Materials Research Society Graduate Student Award (Gold) for his Ph.D. work.

Immediately after defending his Ph.D., Zach began a post-doc at MIT in the lab of Professor Jennifer Rupp.

Then in 2019, Zach went to Argonne National Lab on the Maria Goeppert Mayer Fellowship at Argonne National Laboratory.  He is currently an Argonne Scholar working on materials for energy storage and conversion. His current research focuses on the development of solid-state ion conductors for Lithium and Sodium metal batteries. He develops innovative synthetic methods to produce new solid-state materials and leverages a number of characterization techniques to understand their properties and performance from the nano-to-macro scale.   You can read more about him and his work at https://www.anl.gov/profile/zachary-david-hood.

Dr. Lachgar has said “Zachary Hood is an extraordinary and talented scientist with a growing reputation in the field of materials for sustainability. I have also seen, firsthand, how Zach’s commitment to science has gone beyond his own research.  Zach constantly makes time to help students , postdocs, and young scientists/professors.”

Congratulations to Dr. Hood being selected for this year’s Young Alumni Award.  We are proud to be associated with you.  Keep up the good work.